Since 1949, the National Academy of Television Arts and Sciences, Inc. and Academy of Television Arts & Sciences (together, the "Academies”) have bestowed Emmy Awards on worthy recipients to recognize excellence and achievement in television. (Not that they always get it right: after all, it took 19 nominations before Susan Lucci finally scored a Daytime Emmy.) The physical embodiment of the award is a handsome gold statuette, molded in the shape of a winged figure holding an atom, and made of copper, nickel, silver, gold and stardust. The Academies co-own valid and subsisting trademarks and registered copyrights for the statuette.

On June 12, 2020, the defendant (who, according to the Court "traffics in conspiracy theories") posted a nine-minute video on YouTube featuring a mock award show that honored countries that downplayed the COVID-19 pandemic. As part of the video, defendants created an image of a "Crony Award" statute which consisted of the Emmy statuette holding an illustration of the COVID-19 virus. The faux figurine appears for the opening ten seconds of the Video, and it is used as the Video’s YouTube thumbnail image. The defendant also used the Crony award image in social media posts promoting the video. Here is a side-by-side of the statuettes from the court's opinion:

The Academies served a DMCA takedown notice on YouTube. After the video was removed, defendants filed a counter notice challenging the removal. Ultimately, the Academies sued for copyright infringement, trademark infringement, defamation, and other claims, and the defendants asserted various counterclaims.

Judge Valerie Caproni in the S.D.N.Y. denied the defendant's 12(b)(6) motion to dismiss the Academies' copyright and trademark claims.

De Minimis.  The court rejected that the defendant's use of the Emmy statuette was de minimis. The fake statue appeared prominently, in clear focus, and occupied most of the screen for the first ten seconds of the video. Moreover, the Crony Award image was used as the thumbnail, "making the Crony Graphic perpetually visible even before a user plays the video." Too much. Too prominent. Too long. Too bad for the defendant.

Fair Use. The court also refused to dismiss the copyright claims on fair use grounds. Here's a rundown of the court's analysis of the statutory factors.

Purpose and Character of the Use:  The defendant's use of the Emmy statuette was not transformative. Because the defendant made only minor changes to the Emmy statuette (i.e., merely replacing the globe with a depiction of the COVID virus), the Crony Award "retains the dominant and essential aesthetic elements of the Emmy Statuette." Moreover, the Crony award did not have a fundamentally different and new artistic purpose and character from the Emmy statuette: both "represent awards and were used to promote the parties’ respective award shows." The court rejected that the defendant's use was a parody since the Crony Awards did not mention, much less make commentary on, the Emmy statuette or award show. Finally, at the pleading stage, the Academies had sufficiently alleged that defendant's use was commercial in nature based on the fact that the defendant had included links in the video to invite consumers to pay for its content. Accordingly, the first factor weighed against a finding of fair use

Nature of the Copyrighted Work: Because the statute is a creative work (which was conceded by the defendant) and previously published, this factor also weighed against a finding of fair use.

Amount and Substantiality of Portion Used:  The Crony award imaged copied nearly all of the Emmy statuette, the only difference being the substitution of the COVID-19 virus for the atom. Moreover, given the non-transformative purpose for which the Emmy statuette used, the amount taken was unreasonable. "Even assuming that Defendant needed to use an image of an award to promote its Crony Awards, Defendant has not shown that it was necessary to use the Emmy Statuette." Why not the Oscar? The Golden Globe? The Grammy? The Razzie? The Nobel Peace Prize? The third factor goes to the Academies.

Effect on Market: Although the primary markets for the Emmy Awards and defendant's video series do not meaningfully overlap, the defendant did not offer facts to support its conclusory assertion that its use of the Crony Graphic had no impact on the market value of the Emmy statuette. Moreover, the Academies had adequately alleged that they suffered "actual and reputational harm through Defendant’s association of the Emmy Statuette with dangerous misinformation about the COVID-19 pandemic." The court concluded that the fourth factor "weighs slightly" against a finding of fair use.

Trademark.  The Court also denied the defendant's motion to dismiss the Academies trademark infringement counts, finding that, based on its application of the eight Polaroid factors together, the Academies have plausibly alleged a likelihood of confusion. 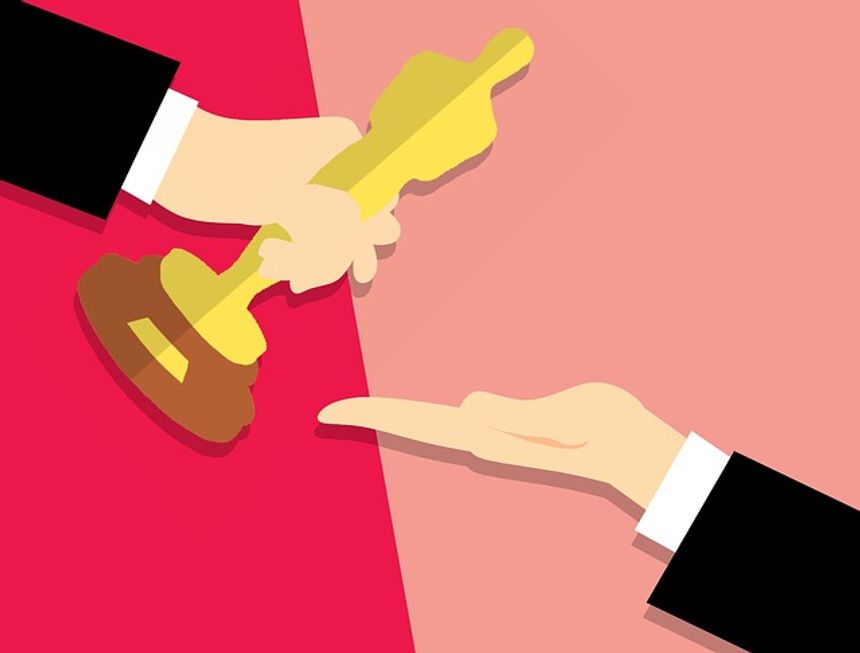