Adidas's two-year effort to secure copyright registration over design elements of its massively popular Yeezy Boost 350 sneakers finally succeeded.  Last week, the Review Board of the Copyright Office granted a second request for reconsideration of the Registration Program’s refusal to register 2-D artwork and sculpture claims in Kanye West’s Yeezy Boost 350 Versions 1 and 2.  Adidas had filed the applications back in 2017, seeking registration not for the sneakers themselves, but for the “irregular black lines of various lengths and shapes on a gray fabric with a black semi-circle in the arch and an orange dotted stripe on an off-white heel loop” that make up the Version 1, and the “several grey lines in a wave pattern with a thick orange stripe on the outsole that fades toward the heel” on the Version 2.

Despite the popularity of the Yeezy’s among sneaker wearers, the Copyright Office was unimpressed.  As background, the Copyright Act does not protect useful articles, which it defines as objects “having an intrinsic utilitarian function that is not merely to portray the appearance of the article or to convey information.”  See 17 U.S.C. § 101.  The Copyright Office denied the applications twice.  First, in a February 2018 decision, it refused to register the designs, calling the sneakers “useful articles that do not contain any copyrightable authorship needed to sustain a claim to copyright.”  Second, by then on a request for reconsideration, it found that, while the sneakers contained separable designs, those designs did not meet the originality requirement, instead consisting of “simple shapes arranged into common, expected patterns in very simple color schemes.”

But the Review Board disagreed.  Relying heavily on Star Athletica, LLC v. Varsity Brands, Inc., 137 S. Ct. 1002 (2017), a Supreme Court case clarifying the test for separability between function and non-functional (and thus eligible for copyright protection) design elements, the Board confirmed that “an artistic feature applied on or incorporated into a useful article may be eligible for copyright protection if it: ‘(1) can be perceived as a two- or three-dimensional work of art separate from the useful article and (2) would qualify as a protectable pictorial, graphic or sculptural work—either on its own or fixed in some other tangible medium of expression—if it were imagined separately from the useful article into which it is incorporated.”  Id. at 1007.  The Yeezy designs passed this test, both because they contained separable design elements and because, “reviewed as a whole, the Works reflect that the common constituent shapes”—here, the irregular black lines and grey lines in a wave pattern described above—“were ‘combined in a distinctive manner indicating some ingenuity.’”

Copyright may be a new avenue of protection for the wildly-popular Yeezys, which have regularly been the target of counterfeiters.  Adidas AG also maintains at least one design patent on for the shoe.

After reviewing the application, deposit copy, and relevant correspondence, along with the arguments in the second request for reconsideration, the Board finds that the Works exhibit copyrightable authorship and thus may be registered. 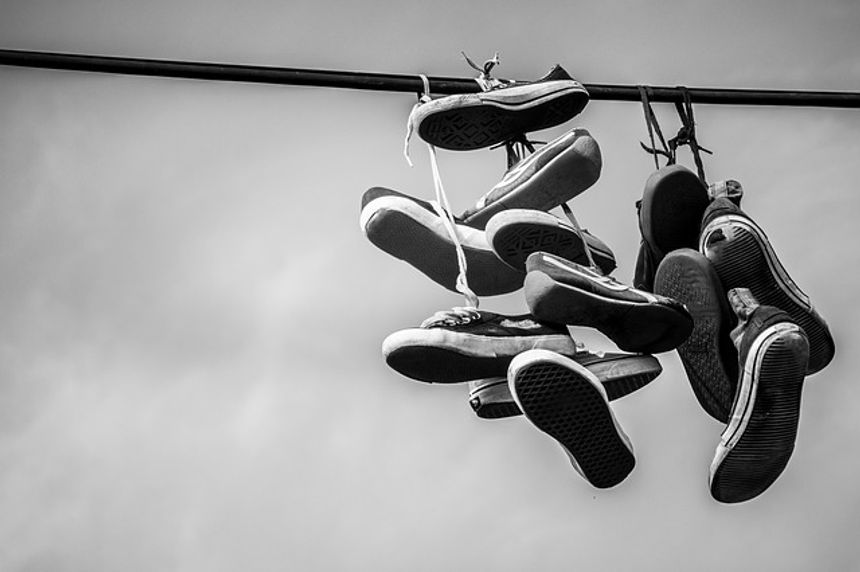