I recall shopping for my mother in my youth, and hearing her say over the phone “it’s the one in the [insert color] package”.  My mother, who sews and crafts (I do not), knew that I paid little attention to her favorite brand of needles or paint and that describing the color of the packaging would exponentially increase the likelihood that I could find her preferred brand.

Perhaps recognizing this aspect of how consumers shop, Forney Industries filed an application with the U.S. Trademark Office to register the multi-colored trade dress in the packaging it uses for its welding and machining tools and accessories (“Forney Trade Dress”). 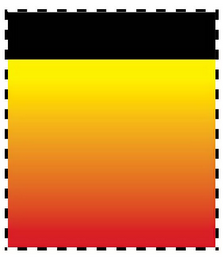 According to the description Forney provided to the Trademark Office, “[t]he mark consists [of] the colors red into yellow with a black banner located near the top as applied to packaging for the goods. The dotted lines merely depict placement of the mark on the packing backer card.”  Examples of Forney’s use of the mark on product packaging are included below.

Though Forney has used its trade dress on products since at least 2008, it sought to register the mark without proving that it had acquired distinctiveness, i.e. without providing evidence that consumers encountering the Forney Trade Dress on welding and machining tools understand the trade dress to indicate that the goods come from a single source.  The type of evidence used to show acquired distinctiveness can be fairly time-consuming and expensive to collect.  It typically includes sales and advertising figures, proof of substantially exclusive use of the mark, unsolicited press, consumer surveys, and the like.  Instead of going this route, Forney claimed that because its mark was used on product packaging, it was inherently distinctive and, thus, eligible for trademark protection without a showing of acquired distinctiveness.

The Trademark Trial and Appeal Board disagreed, refusing registration on the rationale that the Forney Trade Dress—though consisting of multiple colors applied to product packaging—is, nonetheless, a color mark and, therefore, ineligible for registration absent a showing of acquired distinctiveness.  The Board based its decision on Supreme Court precedent, finding in particular that Wal-Mart Stores, Inc. v. Samara Bros. “clarifies that, while certain types of product packaging may be inherently distinctive source indicators, a color mark, that is a mark consisting of color—whether applied to a product or its packaging—is not among them.”  The Board further concluded that “a particular color on a product or its packaging … can never be inherently distinctive and may only be registered on a showing of acquired distinctiveness.”

On the first point, the Federal Circuit reviewed SCOTUS’s prior rulings and explained that they did not go so far as to find that multi-color marks are never inherently distinctive.  Two Pesos, Inc. v. Taco Cabana, Inc. and Qualitex Co. v. Jacobson Products Co. instructed that trade dress can be inherently distinctive and that there is no absolute bar against the use of color alone as a trade dress.  SCOTUS’s ruling in Wal-mart distinguished product design, which almost always serves another function, from product packaging, which often is distinctive for the very purpose of identifying the source of the enclosed product. Reading all three decisions together, the Federal Circuit held that color marks on product packaging are capable of inherent distinctiveness.

On the second point, the Federal Circuit found nothing in the case law requiring a color mark to have a well-defined periphery or border before it can be considered inherently distinctive.  Rather, the test for inherent distinctiveness controls and the Board must review the relevant factors to determine whether “it is reasonable to assume that customers in the relevant market will perceive the trade dress as an indicator of source.” Those factors are whether the trade dress (1) is a common, basic shape or design; (2) is unique or unusual in the particular field; (3) is a mere refinement of a commonly adopted and well-known form or ornamentation for a particular class of goods; or (4) is capable of creating a commercial impression distinct from any accompanying words.

Whether the Forney Trade Dress is inherently distinctive remains to be seen.  The Federal Circuit found only that trade dress consisting of color on product packaging is capable of inherent distinctiveness, not that the Forney Trade Dress itself is inherently distinctive.  The latter question will be determined by an application of the four factors above.  For brand owners, though, this decision is good news as it clarifies some law on product packaging and opens up the possibility of protecting one of the important ways in which brand owners distinguish their products on the market.

The question the Board must answer is whether, as used on its product packaging, the combination of colors and the design those colors create are sufficiently indicative of the source of the goods contained in that packaging. And the Board must assess that question based on the overall impression created by both the colors employed and the pattern created by those colors.