Long before I had ever stepped foot in New York City, I had a very specific idea (which turned out to be pretty accurate) of what the Metropolitan Museum of Art was all about ... what it looked like, what it felt like, and even what it smelled like. For this, I have to thank E. L. Konigsburg’s 1967 book From the Mixed Up Files of Mrs. Basil E. Frankweiler. The story about a sister and brother who run away from home, take up residence at the Met, hide their possession within artifacts from antiquity, sleep in a period bedroom display, and replenish their coffers by bathing in (and scooping up coins from the bottom of) the Met's fountain seemed not only exhilarating, but truly plausible. To this day, whenever I enter any museum, anywhere in the world, I find myself casing the joint, calculating the odds that I could pull off such a caper.

Today's case brings us back to the Met (which - sigh - is currently closed due to the pandemic but, pending state approval, is scheduled to reopen August 29th).

In 2019, the Met teamed up with the Rock 'n Roll Hall of Fame to present “Play It Loud: Instruments of Rock & Roll," billed as the the first major museum exhibition that examined the instruments of rock and roll. Among the 130 instruments included in the exhibition was "The Frankenstein," a guitar that Eddie Van Halen cobbled together from "modified factory seconds and mismatched odd-lot parts." This description comes from the Museum's catalog:

"[The Frankenstein] represents an effort to combine some of the most desirable elements of Gibson and Fender guitars into a single instrument that was not commercially available at the time. Van Halen was continually striving to achieve the ultimate guitar for tone, playability, dependability, and functionality. The unique guitar embodies not only his groundbreaking and unorthodox playing style but also his ingenuity in design and engineering. One of the most recognizable guitars of all time, it spawned legions of copies from other manufacturers and inspired generations of fans to design their own instruments."

While "Play it Loud" (like all good things) came to an end IRL, it survives in a virtual version on the Met's website. The web page dedicated to The Frankenstein on the Met's site includes two paragraphs describing the guitar's history and importance (including the passage quoted above), technical details about the instrument's construction, its exhibition history, and a carrousel with three thumbnail photographs. The first two photos show the guitar alone, and the third shows Van Halen caressing his instrument. With a click, visitors can enlarge one of the photographs at a tme to get a better view. Here is a screen shot: 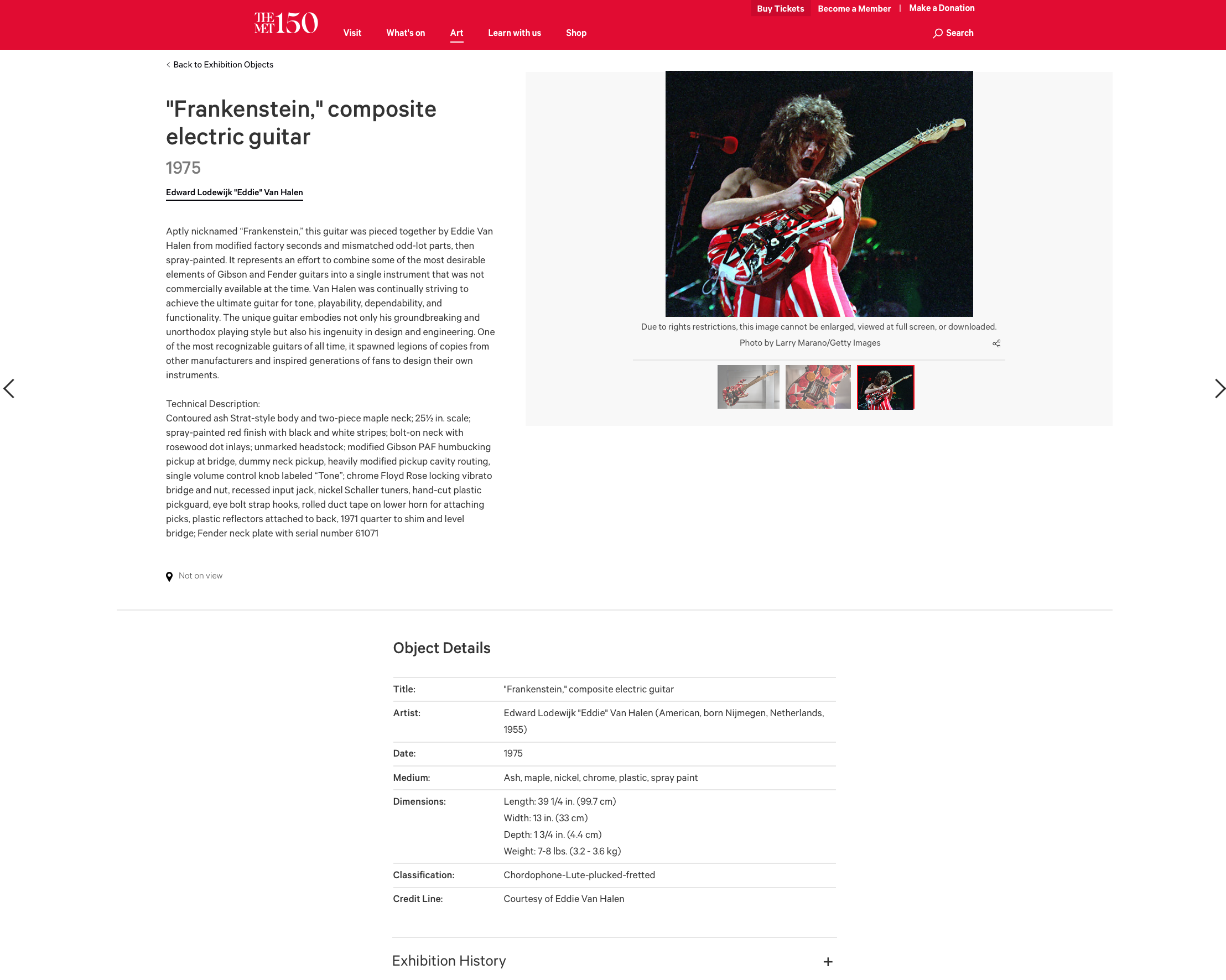 Larry Marano is the professional photographer (and self-described dedicated fan of hard rock and heavy metal music) who snapped the above photo of Van Halen. Marano sued the Met in the Southern District of New York, alleging that the use of his photograph was unauthorized and infringed upon his copyright. Two days after Marano filed, Judge Valerie Caproni ordered him and his attorney (Richard Leibowitz - see this post) to show cause why the complaint shouldn't be dismissed on fair use grounds.

As a preliminary matter, the court noted that even though the case was at the pleading stage, dismissal on fair use grounds would be appropriate if "transformativeness [could] be determined by doing a side-by-side comparison of the original work and the secondary use." After the matter was briefed, the court concluded that such a determination was indeed possible in this case and that the complaint should be dismissed.

Here's a rundown of the court's analysis of the statutory factors: 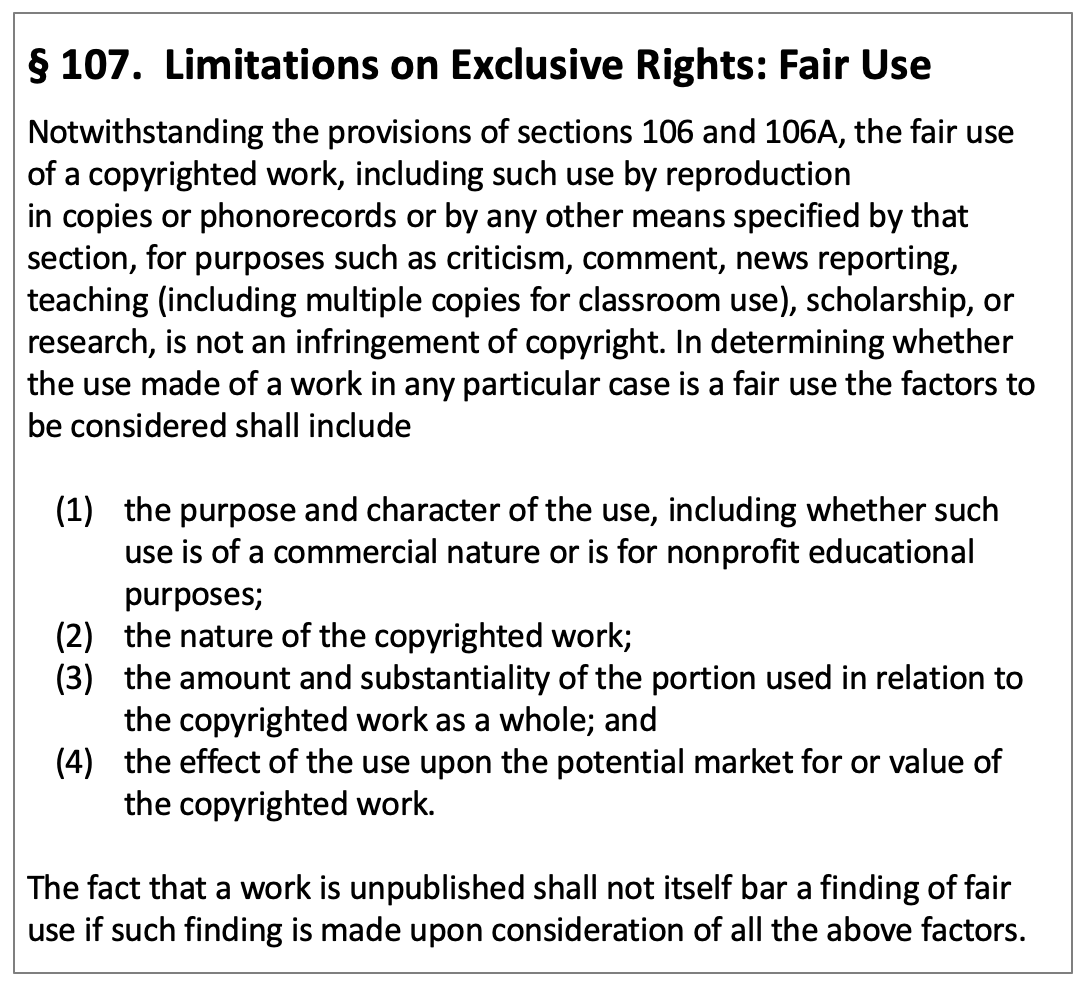 The Purpose and Character of the Use.

The court found that the Met's use of the photograph was highly transformative and that the first factor "strongly favor[ed]" a finding of fair use. In Judge Caproni's view, the Second Circuit's decision in Bill Graham Archives v. Dorling Kindersley Ltd., 448 F.3d 605, 608 (2d Cir. 2006) "all but decide[d] this case." Bill Graham Archives involved a coffee table book about the Grateful Dead that used, without authorization, images of concert posters to illustrate a timeline of the band's history. (You can get a sense of what the timeline looked like on Amazon.) The Second Circuit held that book's use of the photos was transformative for three reasons. First, the purpose of the use was different: the posters “fulfilled the dual purposes of artistic expression and promotion,” whereas images of the posters were included in the book “as historical artifacts to document and represent the actual occurrence of the Grateful Dead concert events.” Second, the book used the images for scholarship purposes (one of the favored purposes called out in the preamble to § 107.) Finally, the transformative nature of the use was "strengthened" because the images appeared in combination with textual material and graphical artwork and in reduced size.

The court found that Met's use of Marano's photo was "analogous on all three dimensions." First, the photo was used by the parties "for entirely different purposes." Whereas Marano created the photo to show “what Van Halen looks like" during a live performance and to “convey the message that Van Halen is a groundbreaking and unorthodox musician," the Met used the photo as a "historical artifact" that served as a “recognizable representation” of the guitar in action and to "contextualize the exhibition object." Second, the Met's use was for scholarly purposes as part of its exploration of instruments (like The Frankenstein) that had a profound impact on rock music. Third, the photo constituted an “inconsequential portion” of the Met’s online catalogue, was surrounded by pages of navigable textual, visual, and audio content, and was located several clicks deep into the website. Finally, the court rejected Marano's argument that the use couldn't be transformative because there was no direct critique or commentary on Murano's photograph itself, citing once again Bill Graham Archives. (See this post for a discussion about how the presence or absence of commentary on the underlying work impacts fair use analysis.)

The Other Statutory Factors.

After finding the use to be highly transformative, the court made quick work of the other statutory factors. "The more transformative the new work, the less will be the significance of other factors, like commercialism, that may weigh against a finding of fair use" (citing, of course, Campbell v. Acuff Rose Music, Inc.).

On the second factor, the court acknowledged that the plaintiff's work was "indisputably creative" and had been previously published. However, in light of the transformative nature of the Met's use, the court found this factor weighed "minimally, if at all, against a finding of fair use."

With respect to the third factor, the court held that the use of the entire photo was "reasonable in light of the purpose and character of the use" and noted that the Met had limited "the visual impact of the Photo’s artistic expression" by reduced its size and combining it with text and other photography. Thus, the third factor also did not weigh against fair use.

Finally, regarding the fourth factor, Judge Caproni didn't buy the plaintiff's argument that the Met's use of his photo interfered with a potential licensing market, specifically, licenses granted to museums that are "shifting towards more modern, pop-culture centered exhibits." The court focused her analysis on the potential impact the museum's use had on "traditional markets" (for which a license would be required) as opposed to "transformative markets" or "fair use markets." Noting that the "Second Circuit has made clear that a 'transformative market does not qualify as a 'traditional market,'" the court continued:

"But Plaintiff "cannot prevent others from entering fair use markets merely by developing or licensing a market [for] transformative uses of [his] own creative work.” Bill Graham, 448 F.3d at 615 (quotation omitted). A traditional market for the Photo would be collectors of photographs of rock legends or other persons seeking to showcase Van Halen. Being generous, that market might even extend to museums exhibiting musicians. But the Met’s use of the Photo to visualize the “Frankenstein” guitar as played by Van Halen falls into a different, transformative market. It is thus unlikely that markets for the Photo’s original expressive purpose would be affected in any way. In any event, Plaintiff has offered only conclusory assertions that the Met’s use has caused a meaningful or significant effect upon the potential market for the copyrighted work." Authors Guild, 804 F.3d at 224 (quotation omitted)." 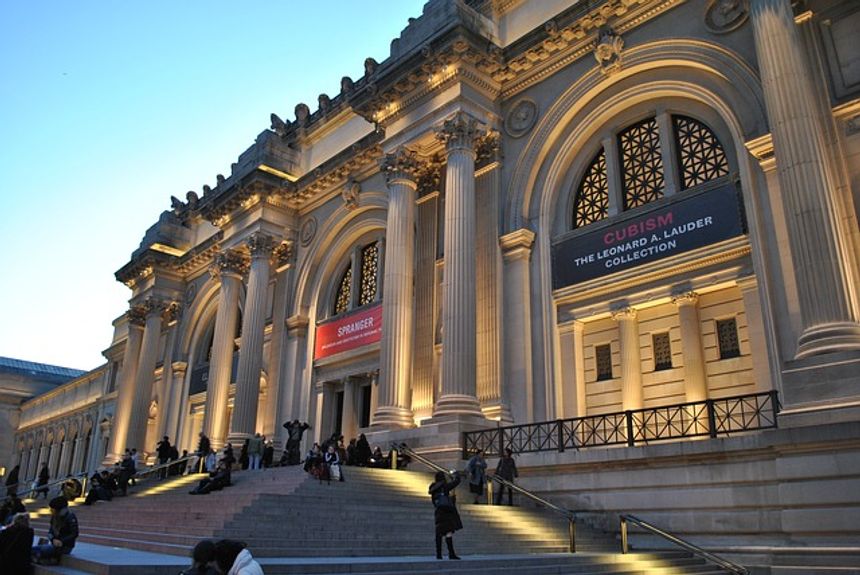