Like many entertainment properties, Disney’s Toy Story franchise works plenty of nostalgia into its films, often endearing itself not only to children, but to their parents as well.  In the most recent iteration, Toy Story 4 (released in June 2019), Disney does this by introducing a new character: a 1970s action figure, Duke Caboom.  Dressed in a white jumpsuit featuring elements of the Canadian flag and sold with a toy motorcycle, a launcher, and ring of fire, Duke Caboom is “Canada’s greatest stuntman.”  His preferred death-defying stunt is to jump his motorcycle over increasingly long distances.  In Disney’s own words:

Duke Caboom is a 1970s toy based on Canada’s greatest stuntman. Riding his powerful Caboom stunt-cycle, Duke is always prepared to show off his stunt poses with confidence and swagger. However, Woody learns quickly that Duke has an Achilles heel: He has never been able to do the awesome stunts advertised in his own toy commercial. For years, Duke has been sitting in an antique store, constantly reliving the failures of his tragic past.

While introduction of the Duke Caboom character may have helped parents enjoy this film as much as their children, it caused quite the opposite reaction for at least one child: Kelly Knievel, son of the 1970s era, real-life, white-jumpsuit-wearing, motorcycle-jumping (and crashing) Evel Knievel.  Claiming a litany of similarities between Duke Caboom and both the real-life Evel Knievel as well as the 1973 Evel Knievel action figure, Kelly Knievel’s company, K and K Promotions, brought right of publicity, trade dress infringement, trademark dilution, false endorsement, and unfair competition claims against Disney in Nevada federal court.

According to the suit, K and K was assigned all rights in Evel Knievel’s right of publicity, trademarks, and copyrights in 1998, just under 10 years before Evel Knievel died in Florida.  Disney’s Duke Caboom character infringes those rights by coming too close.  Illustrated with a number of side-by-side images (such as the one below, showing Caboom on the left and Knievel on the right), the complaint draws several comparisons, including: 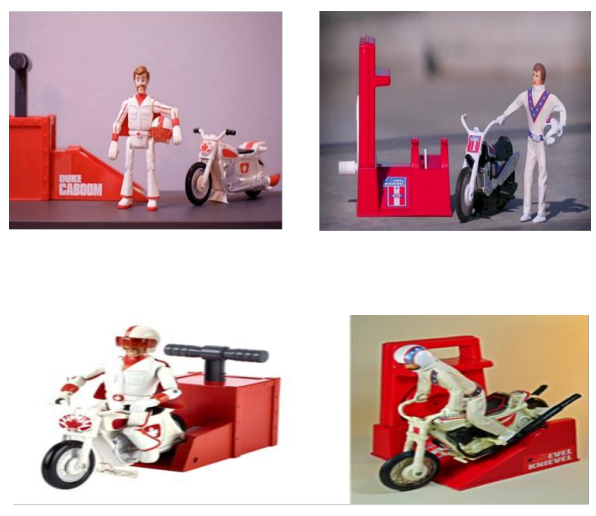 K and K claims that consumers and film reviewers “universally caught on to the connection,” with many referring to Duke Caboom as inspired by Evel Knievel.  Further, these elements, K and K asserts, infringe its right of publicity and leave consumers with the false impression that K and K endorsed the film, when it did not.

As for trademark infringement, the complaint is a little less clear.  While it claims that Disney infringed K and K’s trade dress, it does not offer a definition of that trade dress.  Similarly, it claims that the Caboom character dilutes K and K’s trademark rights, without stating exactly which of the many trademarks it claims to own are diluted.  Notably, the only trademarks K and K identifies explicitly in the complaint are ROBERT CRAIG KNIEVEL, EVEL KNIEVEL, EVEL, KNIEVEL, and EK, none of which it alleges are used in the film or to promote the film.  If the parties cannot settle quickly, we may see these claims dismissed or an amended complaint providing a bit more detail on the trademark and trade dress front.