For those of you who have not had the pleasure of receiving a popcorn shower or cannon-delivered hot dog from him, the Phillie Phanatic is the official mascot of the Philadelphia Phillies baseball team.  His bio on the Phillies's website lists him at 6 foot 6 inches, 300 pounds (mostly fat) and hailing from the Galapagos Islands.  Rather unsurprisingly, his favorite foods are cheesesteaks, Soft pretzels, hoagies, scrapple and Tastykakes, his favorite movie is "Rocky" and his favorite songs are "Motown Philly" and "Take Me Out to the Ballgame".  In 2011, Forbes named the Phanatic America's Favorite Sports Mascot, edging out the San Diego Chicken, and he maintains the distinction of being the only professional mascot to star in a feature film (which went straight to DVD).

But, a recent copyright lawsuit has attempted to keep the Phanatic out of free agency.  For context, we have to go back to 1978, when Phillies’s then-Executive Vice President, Bill Giles, decided to develop a new mascot for the team.  He hired Bonnie Erickson, who had previously worked with Jim Henson in designing Muppets, and Wade Harrison, Erickson's husband and co-founder of Harrison/Erickson, their creative design firm.  The parties entered into an agreement for “the design and construction of a character to be known as The Phillie Fanatic for use as an entertainer during home baseball games” in exchange for $3,900.  Under the agreement, “[t]he character will be copywritten by Harrison/Erickson who reserve all rights of its use for purposes other than expressly specified in writing,” although all sides agreed that the Phanatic, as he later became known (you really can't fight good alliteration), would appear at games and elsewhere on behalf of the team.

For the next few decades, all was relatively well--and the Phanatic went on riding his ATV and doing his signature hip thrust--until 2018, when attorneys for Harrison/Erickson purported to send a termination notice to the Phillies, with an effective date of June 15, 2020.  Termination notices, in this case governed by Section 203 of the Copyright Act, provide the copyright owner with an opportunity to terminate the exclusive or nonexclusive grant of a transfer or license of an author’s copyright in a work assuming specific procedures are followed and the statutory timeframe is observed.  After receiving the notice but, crucially, before the termination date, the Phillies hired artist Tom Sapp to make alterations the Phanatic design, with the express intent of creating a derivative work, resulting in the mascot costume design known as “P2.” 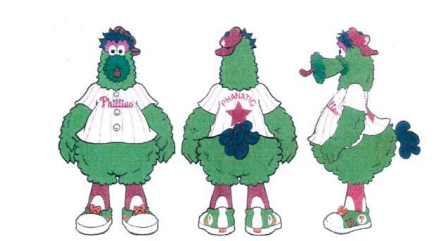 While you can judge the changes for yourself, here's how the Court described them: “P2 has pink star-shaped eyelashes, light blue eyebrows, round eyes, oval pupils, a cylindrical snout (that is, one that is the same diameter the whole way across), ‘wing tips’ on its arms, and a blue-tipped ‘duck butt.'...P1, for its part, has scalloped-shaped eyelashes, dark blue eyebrows, oval or egg-shaped eyes, a ‘megaphone’- shaped snout, no wing tips, and a dark blue tail that comes to a smaller point.”  The newly-updated Phanatic, version P2, debuted in February 2020 during spring training.

The Phillies also, in August 2019, filed suit in the Southern District of New York seeking a declaratory judgment on six different claims, essentially asking the Court to declare that the notice of termination was ineffective, that Harrison/Erickson's copyright registration was fraudulently obtained, and that the Phillies were either a co-author of the costume or author of the Phanatic character.  Harrison/Erickson counterclaimed for infringement and declaratory judgments of their own.

In a hefty 91-page Report and Recommendation that was not exactly a home run for either side, Magistrate Judge Sarah Netburn parsed the claims.  First, the Court determined that Harrison/Erickson's 1979 copyright registration was valid--over the Phillies' argument that the authors had fraudulently identified the costume as an "artistic sculpture" rather than what it truly was--and was barred by res judicata because the Phillies had previously failed to challenge the registration in the 1978 litigation.  In making the former finding, the Court noted that costumes are typically classified as "useful articles" following guidance from the Copyright Office made in the early 1990's, but found that it was at least debatable that mascot costumes were "artistic sculptures" and acknowledged that Harrison/Erickson had submitted photos of the costume to the Copyright Office, meaning that the Office knew what they were granting the registration for.

Second, the Court looked at whether the Phanatic was a "joint work" between Harrison/Erickson and the Phillies, focusing on whether each party made "independently copyrightable" contributions and whether both parties intended the work to be joint.  The Court looked first at whether the Phanatic's uniform--obviously contributed by the Phillies--could qualify as a copyrightable work--despite the fact that clothing is also often a useful article--but ultimately found that it could not as the uniform predated the creation of the Phanatic.  The Court also found that GIles's direction that the mascot be "fat" and "green" with a big nose was not itself a copyrightable contribution.  The Court also found a lack of intent to be joint authors, particularly given the agreements between the parties, which confirmed that the work could be "copywritten" by Harrison/Erickson and later assigned the Phanatic to the Phillies.  The Court also noted statute of limitations and unclean hands challenges to the claim.

Third, and relatedly, the Court found that the Phillies were not owners of the copyright in the Phanatic character.  The Court acknowledged that characters, when embodied in works that are themselves copyrightable, have been found by most Circuits to be copyrightable--Superman is an example.  However, characters must be "sufficiently delineated" to qualify, and the Phanatic, for all of its on-field antics, was not.  Nor was he embodied in any broader copyrightable work.  Although the Phillies attempted to submit videos of the Phanatic taken at games, they failed to satisfy the evidentiary hurdles to admit the videos on summary judgment.

Fourth, the Court analyzed whether P2 was a derivative work, which would be an exception to Harrison/Erickson's termination under 17 U.S.C. 203(b)(1) if created before the termination date. To be a derivative work, the later work must be independently copyrightable and make at least some non-trivial contribution to its predecessor, despite retaining the same aesthetic appeal as the original. Looking at the changes made as a whole, which the Court determined it must do, it found that the changes, in particular to the Phanatic's body, were non-trivial, although they were ultimately "no great strokes of brilliance." It cited in support Eden Toys, Inc. v. Florelee Undergarment Co., 697 F.2d 27 (2d Cir. 1982), which involved changes made to Paddington Bear.  Importantly, that meant that P2 was not subject to termination under the Copyright Act and the Phillies could keep P2 as their mascot.

Finally, after fending off other challenges to the notice and side-stepping the Phillies's trademark claim for lack of a controversy, the Court weighed in on its state law claims. The Court found that these claims, which were for unjust enrichment and breach of the covenant of good faith and fair dealing related to the 1984 assignment were not preempted by the Copyright Act, noting that "[a]n unqualified right to terminate a contract may still subject the party to damages."  In a nutshell, the Magistrate Judge rejected the idea that, although the 1984 assignment purported to go on "forever" it implicitly incorporated the termination right of the Copyright Act and recommended that these claims be permitted to go forward.

It also dismissed Harrison/Erickson's copyright infringement claim--relating to use of the original Phanatic (P1) in merchandising after the June 15, 2020 termination date--because Harrison-Erickson failed to adequately identify which  merchandise allegedly infringed its work, relying on Palmer Kane LLC v. Scholastic Corp., No. 12-cv-03890 (TPG), 2013 WL 709276, at *3 (S.D.N.Y. Feb. 27, 2013) (litigated by our firm).  As above, it also dismissed the claim as it related to P2 itself.  However, in looking at merchandise featuring P2, which was created after the termination date, the Court came to a different conclusion.  It noted that the derivative work exception to termination extends only to works created before the date of termination, in this case, June 15, 2020.  It therefore refused to dismiss Harrison/Erickson's copyright infringement claim to the extent it relied on merchandise featuring P2 created after the termination date.  These alleged derivatives will remain for later stages.

We should keep in mind that this decision is a Report and Recommendation of the Magistrate Judge, and will likely be subject to objections by both sides, and, certainly, to review by the District Court that may change the holdings.  However, the opinion, which reads like the longest law school exam you've ever taken, provides detailed analyses on a variety of important topics in copyright law.  It also suggests one potential way to pivot when in receipt of a termination notice, although leaves open whether further derivatives based on these derivatives will be protected.  And, whatever the outcome, Philadelphia can rest easy knowing that it still has Gritty.

To be sure, the changes to the structural shape of the Phanatic are no great strokes of brilliance, but as the Supreme Court has already noted, a compilation of minimally creative elements, “no matter how crude, humble or obvious,” can render a work a derivative. 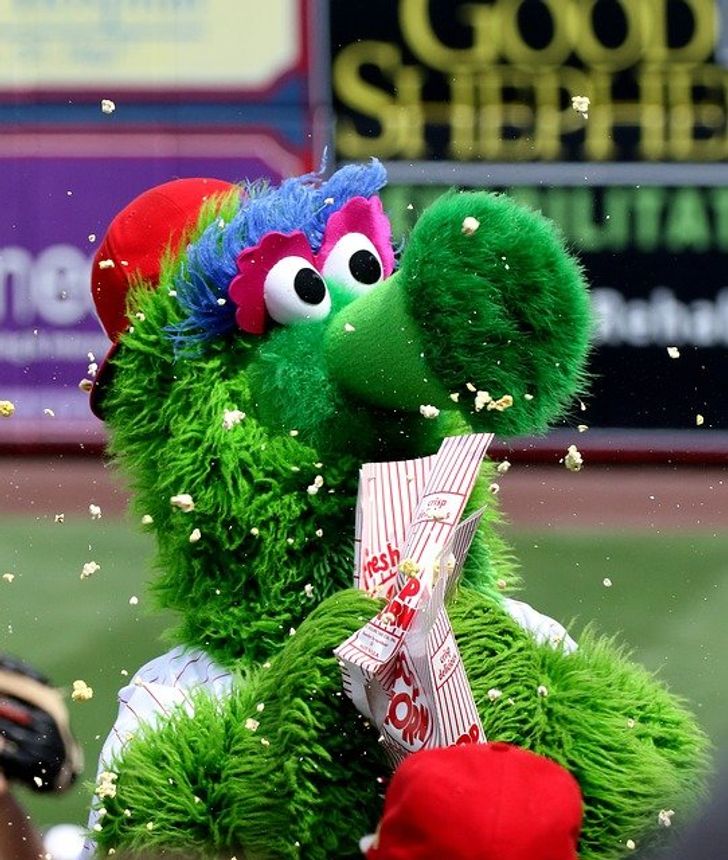