In its first precedential opinion of this decade, the Trademark Trial and Appeal Board tackled motion marks.  A motion mark is a non-traditional trademark that depicts movement.  A motion mark might be a computer graphic, human or animal movement, or other movement that consumers understand as indicating the source of a product.  In December, I blogged about registrations for goats on a roof and marching ducks, both of which are registered motion marks.  The Rolf Institute of Structural Engineering owns Reg. No. 5,259,308 for a computer graphic that shows its “green boy” images coming together with its ROLF INSTITUTE logo.  Automobili Lamborghini owns Reg. No. 2,793,439 for the motion the doors of a Lamborghini make when they open.

Last week, the Board rejected The Ride, LLC’s efforts to register as a motion mark a live tap dance performed for riders on its tour buses, which The Ride claimed functioned as a source indicator for its bus sightseeing services.  The TTAB found the application unfit because the mark failed to function as a source indicator, and because the description and specimen were unacceptable.

In order to be eligible for registration, a motion mark must act as an identifier of source.  In other words, consumers must view the motion mark as indicating a product comes from a particular source, and not merely as a feature or aspect of a product.  The Ride provided two consumer surveys in support of its argument that the mark functioned as a source identifier, and the Board rejected both.  First, rather than following the standard Teflon format, the surveys lacked a “mini-course” educating participants on the difference between a generic and distinctive mark.  As a result, it was impossible to know whether survey participants understood the questions being asked or whether they were capable of recognizing an indicator of source.  Second, the survey universe was underinclusive and biased, as it contained only travel professionals and consumers who had already experienced The Ride’s bus tours, instead of focusing on the relevant population of consumers who have or will hire tour bus services.  Third, the questions were biased and leading, and failed the depict the motion mark that The Ride was seeking to register.  Finally, nothing in the survey tested whether consumers associate the proposed motion mark with The Ride’s services.

Rejecting the surveys, the Board found there was no evidence that the proposed mark actually functions as a mark and refused registration.  In doing so, it noted that “the applied-for motion mark may not be the type of designation intended to be registered by the Lanham Act in that it appears to be a pictorial representation of an aspect of Applicant’s recited services, namely guided bus tours rendered with various performers on sidewalks and other locations.”

Because motion marks cannot be depicted on the register as they exist in reality, the Board has strict rules for what the description must contain.  Here, the Board cautioned that the description should “state clearly and accurately what the mark comprises,” “should describe all significant aspect of the mark,” and “must clearly indicate that the mark is ‘three-dimensional’… and that the trade dress is for services offered.”

The Board then found The Ride’s description lacking because it did not detail the mark as it appeared in the drawing (to view the drawing, scroll down) or make clear which aspects of the drawing were included in the mark.  For example, the description did not mention the bus windows, and identified the depicted individual as a banker when he was more accurately described as a person in a suit.  Further, the description failed to “indicate that the trade dress is three-dimensional or whether, in the alternative, the trade dress is a two-dimensional mark that could be interpreted as three-dimensional.”

In addition to the substantive refusal and description refusal, the Board also refused registration because The Ride’s specimen did not show use of the mark in the drawing.  An acceptable specimen must show the whole mark, as it is depicted in the drawing.  Here, The Ride’s specimens did not match the drawing.  For example, one of the specimens showed a man in a suit in a variety of poses, but did not depict the man as seen through the two bus windows shown in the drawing.  Another specimen showed tap dancing, but did not display the movements in either of the freeze frames in the drawing.  Further, the audio accompanying that specimen indicated that the tap choreography changed from viewing to viewing, suggesting there was a lack of uniformity in the display of the proposed mark.  In short, none of the several specimens The Ride provided displayed the proposed mark as depicted in the drawing and, thus, the application was refused.

We observe that the applied-for motion mark may not be the type of designation intended to be registered by the Lanham Act in that it appears to be a pictorial representation of an aspect of Applicant’s recited services, namely guided bus tours rendered with various performers on sidewalks and other locations. 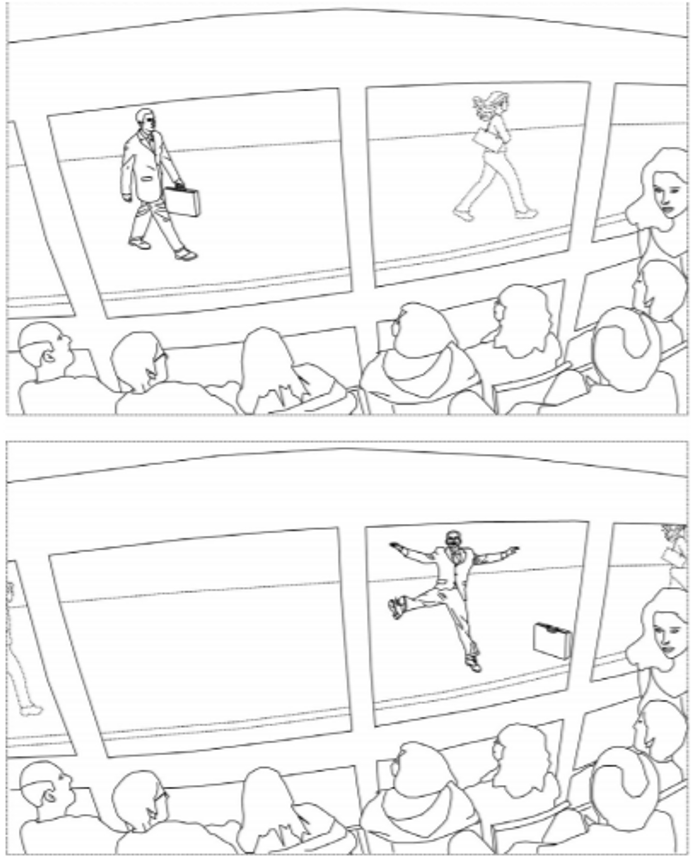