There are certain fundamental requirements that underlie most false advertising and deceptive business practices laws.  There needs to be a materially deceptive act or practice.  Such act must cause injury to the plaintiff.  And, critically, the deception must mislead a reasonable consumer acting reasonably under the circumstances.  This reasonableness standard is often a key focus in a false advertising fight and a difficult basis to argue for dismissal at the pleading stage.  Reasonableness, a plaintiff will argue, is a question of fact that cannot be decided by the court on a motion to dismiss.

Not so fast.  The Second Circuit has recently held--now for the second time in less than a year--that a court can decide at the pleading stage that the reasonableness standard has not been met.  In Chen v. Dunkin' Brands, Inc., a putative class of plaintiffs sued Dunkin' Donuts (now just Dunkin') over its Angus Steak & Egg Breakfast Sandwich and Angus Steak & Egg Wake-Up Wrap.  The plaintiffs argued that Dunkin' deceptively marketed these grab-and-go breakfast sandwiches as "angus steak" despite the fact that they actually contained a ground beef patty rather than an "intact" piece of meat.  This was bull, claimed the plaintiffs, because a reasonable plaintiff would have assumed when she paid less than $4 for the sandwich and $2 for the wrap that she was buying a proper steak sandwich with egg.

The court spent little time getting to the meat of plaintiffs' argument.  The three television advertisements identified in the operative complaint each concluded with "multiple zoomed-in images that clearly depict the 'steak' in the Products as a beef patty."  These images amounted to a full disclosure, said the court, which undermined the claims of deception under N.Y. General Business Law Sections 349 and 350 (the New York laws at issue in the case).  In addition, the dictionary definition of "steak," while it can refer to "a slice of meat," also could mean "ground beef prepared for cooking or for serving in the manner of a steak," such is in chopped steak, hamburger steak, or--my personal fave--Salisbury steak.  Also noteworthy was the undisputed fact that the products do in fact contain "Angus beef."  Ultimately, the Second Circuit stuck a fork in the claim by concluding that the products "are marketed as grab-and-go products that can be consumed in hand" without needing utensils.  "A reasonable consumer purchasing one of the Products from Dunkin' Donuts in that context would not be misled into thinking she was purchasing an 'unadulterated piece of meat.'"

A procedural side note: most of the case was actually dismissed on personal jurisdiction grounds, because four of the five named plaintiffs were not New York residents and, therefore, did not have a basis to sue Dunkin' in New York unless Dunkin' was subject to general personal jurisdiction in the Empire State.  Unsurprisingly, Chen added to the growing body of case law since the Supreme Court's decision in Daimler AG v. Bauman, 571 U.S. 117 (2014), that limit general jurisdiction for corporations primarily to states where they are "at home"--namely, where they are incorporated or headquartered.  Because Dunkin' is a Delaware corporation with Massachusetts headquarters, it was not subject to general jurisdiction in New York and, thus, only the New York plaintiff's claim (Chen's) remained--and was subsequently dismissed based on the analysis above.

Other than my burning desire to sink my teeth into one of these breakfast creations, what's important about this decision was the court's willingness to dismiss a false advertising case on reasonable consumer grounds on a motion to dismiss.  Along the same lines, it will be interesting to see whether the Second Circuit's upholding the district court's finding that an image of the product at the end of the advertisement amounted to a full disclosure gets any traction in other cases.  While the underlying reasonableness standards for a false advertising claim were un-minced, advertisers should take some comfort that they will not necessarily have to go through discovery when a court can determine reasonableness on the pleadings. 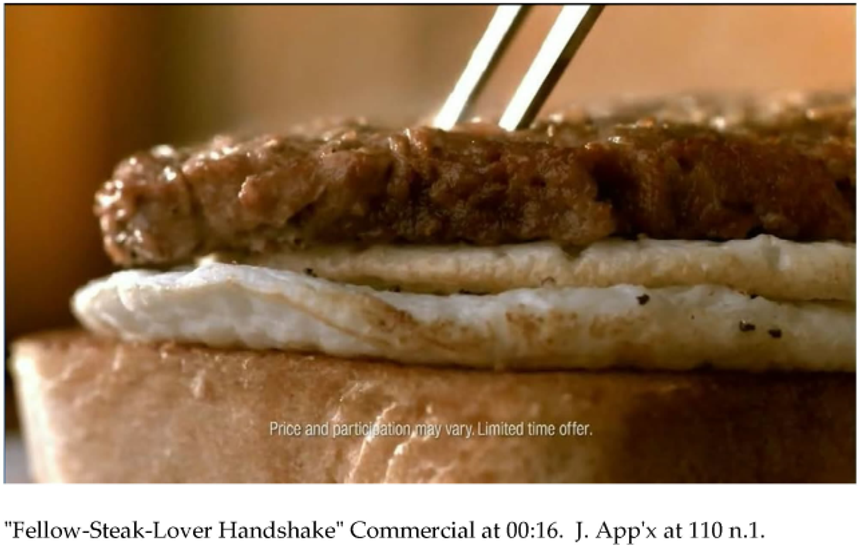