"And to round out your starting lineup for the Milwaukee Bucks, at forward hailing from Greece, number 34, the Greek Freak, Giannis Antetokounmpo!!!" (*cue cheers*).

Although the NBA season is on pause, Antetokounmpo is still taking people to court. During the month of May, reigning NBA MVP Giannis Antetokounmpo, filed eight different lawsuits (collectively, the "Complaints") in the United States District Court Southern District of New York alleging infringement of his "GREEK FREAK" trademark "through the unauthorized use of the GREEK FREAK mark, including, without limitation, by advertising, marketing, promoting, distributing, displaying, offering for sale and selling unlicensed infringing products bearing the GREEK FREAK brand label." The Complaints includes claims for, among other claims, (i) infringement of his federally registered "GREEK FREAK" trademark under the Lanham Act (15 U.S.C. § 1051), (ii) violation of Antetokounmpo's right of publicity, (iii) common law and federal trademark dilution, and (iv) common law claims for unjust enrichment. As a result of Defendants' conduct, Antetokounmpo is seeking monetary and injunctive relief. The allegedly infringing products that the Defendants sell or previously sold include cell phone cases, t-shirts, baby onesies (yes, even onesies), and hoodies (collectively, the "Allegedly Infringing Products").

The eight defendant parties are as follows (collectively, the "Defendants"):

Antetokounmpo's registered GREEK FREAK mark covers several categories of use, including backpacks, shirts, t-shirts, sweatshirts, hooded sweatshirts, jackets, hooded jackets, sports jerseys, socks, warm up suits, caps, and hats. Antetokounmpo stated in the respective complaints that he has also applied for a variation of his GREEK FREAK mark, for “GREEK FR34K,” which encompasses his jersey number 34. Antetokounmpo noted that GREEK FR34K has been approved for registration by the USPTO, no third party oppositions have been filed against it, and it will soon be formally registered with the USPTO. In addition to uses for clothing and apparel accessories, the GREEK FR34K mark will also cover items such as aftershave, fragrances, nutritional supplements, sports and energy drinks, basketballs, and a variety of snacks.

In the Complaints, Antetokounmpo stated that he had previously reached out to each Defendant with a cease and desist letter (the "Letter") to notify the Defendants that he would be filing lawsuits against them for the alleged trademark infringement and violation of his right of publicity if they did not respond within five (5) days from the date of the Letter, along with a request for the full accounting of every merchandise sold by the Defendant which uses GREEK FREAK and other similar variations and the profits derived from Defendant's use of GREEK FREAK received to date. The Letter also served as a formal demand for, among other requests, the immediate cease and desist from the Defendants initiating, engaging or continuing any use of Antetokounmpo's likeness, name and the GREEK FREAK and GREAK FR34K marks and any other relevant variations of the marks, and asked the Defendants to promptly remove related products from their inventory, website and social media pages.

According to the Complaints, after receiving the Letter, some Defendants provided record of the alleged sales and profits while others chose not respond to the Letter at all. Furthermore, Antetokounmpo alleged that the Defendants "failed to cooperate with Antetokounmpo’s request for surrender of the infringing inventory and other reasonable requests which were meant to ensure that the infringement has ceased and that the Antetokounmpo’s has been adequately compensated for the damages he incurred."

Of course, the parties may end up settling outside of court.  But if some or all of the lawsuits proceed, some or all of the Defendants may be found liable for trademark infringement based upon the Allegedly Infringing Products referenced in the Complaint exhibits.  Such defendants would face the possibility of both injunctive relief and monetary damages.

The main takeaway from these lawsuits is two-fold. As an offensive tactic, they serve as a reminder that registering trademarks can be a great way to help build your brand as Antetokounmpo has done by capitalizing on and registering a trademark for his nickname.  From a defensive standpoint, brands and advertisers should be mindful that Antetokounmpo is working diligently to protect his trademark and brand by actively finding potential infringers and going after those companies and associated individuals in court.

"Antetokounmpo is committed to protecting and defending his brand name against any unauthorized use and exploitation. He has therefore registered the mark “GREEK FREAK” and “GREEK FR34K” (application approved by the USPTO) both in Europe and the United States. Only third parties authorized by our client have the right to use his image, likeness, name and/or nickname, under conditions mutually agreed." -- PARDALIS & NOHAVICKA, LLP 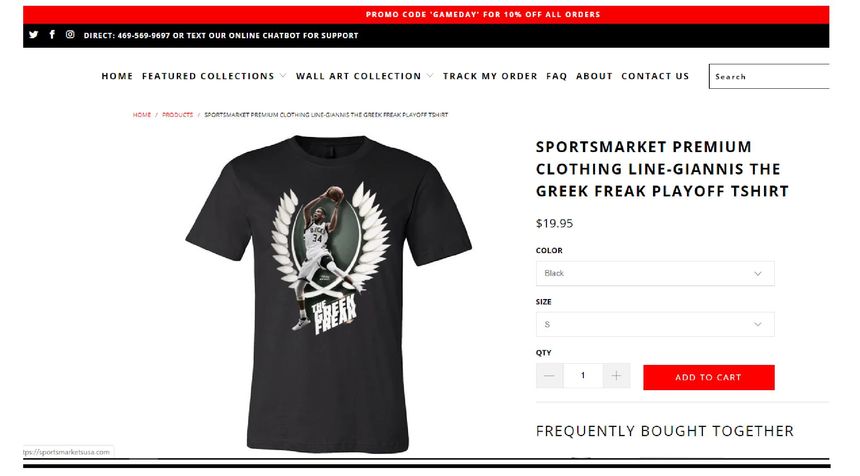